Start a Wiki
Abbey is labeled as The Reluctant Girl in Total Drama Revolution. She was on the Dancing Bugs team.

Abbey is a very nice girl who lives with her dad and her younger sister. Her mom died when Abbey was only twelve years old, and this made Abbey pretty sad for a very long time. Eventually, she got over it, but she still sometimes thinks about her mother. She is a very pretty girl, and is kind to most people. When she was in middle school, boys began to notice her, and began to follow her around. She did not appreciate all this attention, however, and has gotten somewhat sick of boys stalking her. When she was in ninth grade, instead of being nice to boys, she decided to have a different approach. Now, whenever a boy tries to flirt with Abbey, she turns her back on them and struts away, not even noticing them. Boys do not like this, because lots of them want to date her, but she doesn't want a boyfriend at the moment. Abbey has not had a boyfriend since her mother died, and doesn't care either.

Abbey joined Total Drama to have fun, and not get a boyfriend.

Abbey was the last character to arrive in the first chapter. She quickly showed her dislike of boys, especially Trick and Vincent who tried to flirt with her. People also noticed that she had the same name as Nic's buff ab belly, which she got angry about and protested that it was spelled different.

Quickly, she made friends with Mattie who was on her team and shared similar views about boys. The two made contact with Nic himself in a challenge, and he was attracted to Abbey, who shooed him off. Abbey frequently helped Mattie with her Toad problems, and Mattie helped her with problems about her mother's death and other stuff in return.

Eventually, Kim was eliminated, leaving her only friend, Tasia, to hang out with Abbey and Mattie. Mattie was somewhat accepting of Tasia, but Abbey harbored a very strong and somewhat exaggerated hatred of her. She repeatedly ranted in the confessional about how much she hated her and plotted to vote her off whenever her team lost.

Later on in the game, Abbey began to notice Kavren having a seemingly small crush on her. Abbey tried to avoid his flirtatious advances. Mattie was eliminated soon after, leaving Abbey with nobody except Tasia. The merge occurred the episode after, however. Abbey met the interesting girls on the other team, and quickly made enemies with them.

During an interesting night of the first day of the merge, Tasia had a talk with Kavren. Kavren revealed that he had a crush on Abbey and started to talk to her. Despite Abbey playing hard to get during most of the season, in the confessional, she admitted that she had a crush on him as well. He almost asked her out, but didn't because his friends and Tasia were all watching. Abbey was eliminated that night, and left sadly.

Abbey appears in the finale. She enthusiastically supports Kavren to win. When he loses, she doesn't care. Kavren then asks her out, and she says yes.

Abbey was mentioned in passing a few times on Superstar Showdown, thanks to her then-boyfriend Kavren competing in the season. In the losers' chapter, it was revealed that she had dumped Kavren over text  message, and was "in a better place" according to Kavren (college, not death). She returned for the finale, but didn't speak.

Abbey is in her room. There is a picture of her mother next to her. "Hi, I'm Abbey. I want to compete in Total Drama, but if any freaking boys ask me out, I'm quitting." She then looks at her mom's picture and a tear falls down her cheek. She then turns off the camera. 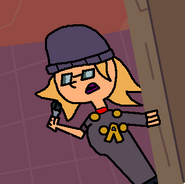 Abbey singing Baby to Kavren.
Add a photo to this gallery
Retrieved from "https://totaldramaislandfanfiction.fandom.com/wiki/Abbey?oldid=518031"
Community content is available under CC-BY-SA unless otherwise noted.