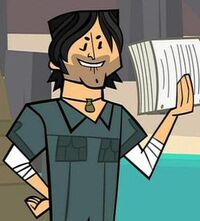 This character page is designed for use with Total Drama Island, by Gilbert and Sullivan

Chris McLean, a well-known celebrity who hosts Total Drama Island, is essentially an evil counterpart to Survivor’s Jeff Probst. He rarely shows any concern for the well being of the contestants—when he does, it is always for selfish reasons—and neither the contestants nor the viewers can take his words at face value. He has a history of changing rules on the fly, sometimes without considering the ramifications, and is inclined to enforce the letter of the law at the expense of the spirit.

The spelling of Chris’ surname is a matter of some dispute. The nature of his celebrity is not disclosed in Total Drama Island, but certain references in Total Drama Action indicate that he is an actor.

Chris is one of several TDI characters with a reasonably close analog (The Duke of Plaza-Toro in The Gondoliers) in the Gilbert & Sullivan series.

Entrance of the Lord High Executioner from The Mikado

Retrieved from "https://totaldramaislandfanfiction.fandom.com/wiki/Chris_McLean_(TDI-G%26S)?oldid=164541"
Community content is available under CC-BY-SA unless otherwise noted.