Cosmic River, labeled as The Gentle Hippie is a competitor on Total Drama What The Heck? He is on The Bulldogs.

Cosmic River is just a humble hippie who loves nature. He is very mellow, gentle and friendly. He use to care less until he met a man who taught him the wonders of nature and how important the environment is. He soon wanted to preserve nature and make peace like the man.

When is parents wouldn't accept his ideas and wouldn't try to help save earth through small thinks, he decided to run away and became the mellow hippie he is now. He uses non-violent ways to try and convince people protect Earth. He has also become a vegetarian. The biggest issue he has been fighting for have been rights for caterpillars, an animal he is says is "Everyone's spirit animal."

One day a strange girl noticed him randomly preaching about caterpillars outside her hotel and decided he would make a good addition to the show. He agreed to appear and hopes to win and use the money to help fund his ideas to use non violent ways to get rights for caterpillars.

Cosmic River is the second new contestant to arrive, and greets everyone friendly. When asked if he's ready for this season, Cosmic River states he is and hopes 'it's real funky...'

Cosmic River exhibits kindness often. During the Amazon challenge, he teams up with the depressed Taylor when she has no one left. Ultimately, the two don't reach the river first. Cosmic River immediately quits the challenge, due to it using violence which he is against. Cosmic River becomes the last person to join the The Bulldogs, Bradley hesitantly choosing him.

Cosmic River soon becomes close friends with DJ, bonding over their love of animals. He often shows kindness to Barbie, who is ostracized by the rest of her team. He even sticks up for her when she is bullied for her weight.

However, Bradley manipulates Cosmic River and DJ, telling them that the reason he's against Barbie is because she doesn't care for animals, having luggage made of fur. Cosmic River says he understands, but doesn't approve of his attitude. He gains the twos trust after rescuing DJ's bunny. 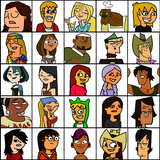 Cosmic River in the cast photo (Designed by Reddy)
Add a photo to this gallery
Retrieved from "https://totaldramaislandfanfiction.fandom.com/wiki/Cosmic_River?oldid=440471"
Community content is available under CC-BY-SA unless otherwise noted.