Start a Wiki
Dolph is labeled as The Grumpy Hypocrite in Total Drama Revolution. He was on the Dancing Bugs team.

Dolph lives in a very small town with not very many people. His high school has only about fifty people in each grade, but many of them are troubled. One day, when Dolph was in ninth grade, he was asked by his teacher to have a column in the newspaper. He was thinking of doing a comic strip, but then decided that he wanted to be an advice columnist instead. Dolph's advice column is called "Ask Doctor Dolph", and he is regularly written to by people with relationship problems, emotional problems, and just plain weird people. Unfortunately, Dolph is an extremely negative person, and he is proud of it. Whenever somebody says something nice and cheery, Dolph comes back by saying something depressing and gloomy. He is also extremely hypocritical, because he gives great advice in the papers, such as saying that teasing is wrong, then teases his fellow classmates. Dolph's lately been getting tired of all his letters, so he has resorted to being his normal grumpy self while answering the questions. Not many people like to be around Dolph, because they find him depressing.

Dolph joined Total Drama so he could spread good advice.

Dolph was not the happiest, nicest, or most fun character to be around during his time on the show. When he arrived, he began ranting about how teasing is wrong, respecting your elders, and not peeing in your bed. People instantly thought he was strange.

Dolph did not really help out his team that much during the challenges. Early into the game, his team began to get sick of him, so they soon voted him out. He was enraged by this, and flew away on a magical Nyan Cat instead of taking the Taxi of Losers.

Soon after Dolph was eliminated, he started to make cameos. He was first spotted riding across the sky in his Nyan Cat various times. Then, he gripped Vincent's leg when Vincent was under the water. He then pretended to be Dustin Nutria, and Chris actually fell for it. He directed a whole challenge as Dustin, and then revealed his true form. He threatened Chris to let him back in the game, but Chris refused to let him in. Dolph then appeared later, and fell out of a ceiling grate. He convinced the girls to vote out Ori, for Ori had voted off Dolph's crush, Mattie, beforehand.

Dolph did not show up for the aftermath special, but he has been reported by Cammy and Northworth. Cammy said that she found him playing poker against himself in the middle of the road, and Northworth said he found him working at McDonald's, dressed as a girl, and then he called the police, who turned out to be Dolph as well.

In the next chapter, Dolph did community service with Smoothie Guy and Dustin Nutria, but that Dolph was an impostor, actually Tasia, who was Chris, who was Dolph. In the chapter after that, he had a large role, having constructed a metal head of himself and erecting it in the sky. The final four infiltrated it and Elle had a duel with Dolph himself, but it turned out it was all a dream, manipulated by Dolph so he could appear in it.

He appeared in the second aftermath, forcing Northworth to song for him and calling everyone hobknockers. He disappeared shortly after, and appeared in the penultimate chapter where he disguised himself as a producer and gave Chris a challenge.

In the finale, he appeared multiple times, first he hid in the toilet. He then dressed up as Randy Spamberg of the Lonesome Body of Land Surrounded By Water, along with his Nyan Cat and the Smoothie Guy. He then gave Chris the challenge, which was to catch him, and he took off with the Nyan Cat and the million dollars. The two finalists got to him simultaneously, so he ended up picking the winner, also known as Tasia. He then uttered a goodbye and said he'd be at the reunion, flying away on his Nyan Cat.

Dolph shockingly made minimal appearances in Superstar Showdown, but Roz revealed at one point that she was going to do a Dolph-themed challenge one episode before it was thwarted by Gail. He did return for the finale, though, where he was sporting a tie-dyed shirt, a full beard, and hair down to his waist. He revealed that he had been issued a restraining order by the entire Total Drama cast, but it had been lifted, which he was happy about -- but then he revealed that he had been handcuffed by security to prevent any shenanigans.

Dolph is in his room, petting a hamster. "Why, hello. I am Dolph, and I have something to say. Never resort to potty humor as comedy. It is not funny, nor a good role model for the little children."

The hamster bites his arm. "Ow! Anus, what the heck?!" Dolph stares at the camera. "Oh, you're wondering why his name is Anus, when I said I hated potty humor. Well, his name was originally Angus, but I kinda forgot the G eventually... So, yeah. Pick me."

Dolph in the background of the Chapter 10 teaser. 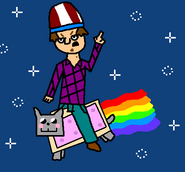 Dolph gets eliminated in a strange way.

Dolph helping the Tanukis play a song.
Add a photo to this gallery
Retrieved from "https://totaldramaislandfanfiction.fandom.com/wiki/Dolph?oldid=518035"
Community content is available under CC-BY-SA unless otherwise noted.