Helen, labeled as The Sarcastic Seducer, is a character on Total Drama: Paradise Falls, as a member of the Angry Birds.

Helen is the second youngest of four children, and is the only girl. Because of that she was more pampered than her brothers. She was the “daddy’s little girl”. She acts sweet and nice with older people, but she's mean, sarcastic and cold-hearted with people of her age, especially in school. She is always causing fights between bullies and nerds, and seduces others girls’ boyfriends. She acts sweet in front of her parents and teachers, so they don’t believe when the others teenagers tell about the drama that she causes. Helen’s brothers are almost as mean as their sister, and they help her with causing drama.

Helen joined Total Drama to meet a nice guy, because she loves drama and especially to won the money.

Helen in her swimwear.

Helen in her sleepwear. 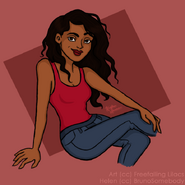 Helen's fanart by Freefalling Lilacs.
Add a photo to this gallery
Retrieved from "https://totaldramaislandfanfiction.fandom.com/wiki/Helen?oldid=502692"
Community content is available under CC-BY-SA unless otherwise noted.