Start a Wiki
Ivy, labeled as the Thorny Tongued, is a contestant on Total Drama Frozen.

Ivy watched Total Drama ever since she was young. It was her all-time favourite show, her parents would often buy her the boxed edition of every season after it aired. She and her friends would often laugh at the situations the teens ended up getting into, and gossiped about the relationships the teens had. Total Drama was their thing. After the show stopped airing, or at least the original seasons with Chris, Ivy stopped watching the show, and Ivy and her friends found new things to gossip and talk about. And once Ivy entered high school, she ruled the halls. She was queen bee. Her and her posse strutted through the halls like nobody’s business. During lunch hour, they would sit in the exact centre of the cafeteria and force the lunch ladies to bring the food to them. Ivy joined Total Drama Frozen to show her friends just how easy it would be to win.

In It's a Winter Wonder Land, Ivy arrived, and insulted the intern, Brandon. Lindsay mentioned that she thought Ivy looked much nicer in her audition video, which caused Ivy to blush. When Saber arrived, Ivy made fun of him, and when Lindsay couldn't recall his name, Ivy made a sarcastic remark and pointed to his name tag. Ivy spent the remainder of the chapter mocking the other campers, namely Kaleb, who she got into a fight with. When Ivy was placed on team Mrs.Claus, she, along with the other girls all glared at Kaleb who was also on their team.

Later during It's Still a Winter Wonderland, Ivy convinced Hannah, to spend time with Kaleb so that she and the other girls wouldn't have to listen to him. Ivy was placed on Team Olympic.  Ivy took charge of her team during the challenge - only to have her idea swiped by the other team. After this, Ivy, along with Jade decided to give up. When Rosalie started to make the sleigh out of snow, Ivy comanded the team to help. Her and Dania get into an arguement when they are sliding down the hill, which leads them to fall out of the sled. As they tumbled through the snow, they created a giant snowball, that engulfed all of the other contestants. At the finish line, Ivy argues with Kaleb about who won the challenge. Lindsay mentioned how Ivy's team was missing a member, but Ivy claimed that Dania got eaten by a polar bear. At the elimination ceremony, Ivy sat with Jade. She received the last s'more of the night, and mocked Andre as he was sent home.

Ivy is seen snoring in The Frosted Towers. She wakes up and is confused as to why the other girls are laughing. Ivy sends Jade after Dania and Rosalie to spy on them, then writes in her diary. Ivy takes charge during the challenge, dividing her team. She pairs herself with Dania. They don't find the pearl and get argue while they rush down the tower to find it. Ivy helps find the pearl after Lexi drops it, and wins the challenge for her team. She's shown to be annoyed with Dania when she chooses to help comfort Lexi instead of winning the challenge with her. She plots with Jade to eliminate Dania.

During Snow Day Ivy spends her time complaining about Dania in the confessional. Later, she is rescued by a peeved Emmett. She takes this time to talk alliances with Emmett, using him to eliminate Dania at the elimination.

Rosalie assures Emmett that she won't vote for Rosalie in A Kipper for Skipper. Ivy ignores Mitchell when he jokingly asks for her number. When the challenge is announced Ivy is quick to mock Lindsay. Ivy doesn't believe Frosty, and decided to lead the team herself, ignoring Frosty's advice. Failing to get their own fish, Ivy fights with Saber for his - but ends up losing. When they lose the challenge, Ivy works with Jade to figure out who they should eliminate. Needing his vote, Ivy tries to flirt and bribe Mitchel into joining her, but fails to secure his vote. At the elimination Ivy is shocked when Emmett is eliminated.

The Twelve Days of Christmas

This Snow is Real

The Gift That Keeps on Giving

End of a Season 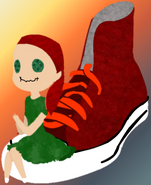 Ivy in Winter (Wiz Dan)
Add a photo to this gallery

Retrieved from "https://totaldramaislandfanfiction.fandom.com/wiki/Ivy?oldid=531969"
Community content is available under CC-BY-SA unless otherwise noted.