Jake is an expert at skateboarding and has skateboarded since he was a young kid, though he has gotten injured at times. For instance he once skateboarded down a hill and fell off a cliff breaking his arm. His parents told him to stop skateboarding in dangerous areas but he continued doing it thus getting him in more dangerous predicaments. At one point he started watching TDI and liked Geoff the most. He wished to get on but couldn't until one day Oweguy came bye and signed him up for Total Drama Oweguy.

His goal in Total Drama is to make it on the show, make friends, and make it far.

In Oweguy's Awesome Camp Jake was the fifteenth contestant to arrive. He arrived at the same time Chad and Jasmine arrived. Chuck complained that all three of them were boing. He didn't talk much throughout the rest of the chapter. After getting the group pic done they got assigned to teams. Jake was placed on the Screaming Hamburgers team. After eating at the mess hall the contestants prepared for their first challenge. A hang gliding race.

In Hang Gliding Race of Doom Jake again doesn't talk much and doesn't really have a major role. During the challenge he was the third set of people to go for the team along with Jasmine. They luckily made it to the other side and scored two points. With a total of six points to two the Screaming Hamburgers win invincibility.

Jake's role was updated a little in When Fears Attack but not until near the end of the chapter. He was the last person left to conquer their fear on his team along with the Masked Warrior. He had to conquer his fear of high dives but unfortunetly couldn't conquer it but due to that the Screaming Hamburgers had a higher score than the Killer Hot Dogs they won invincibility.

Jake didn't really appear in What Ever Happened to Oweguy but he did wake up Marine, Kuro, Flare, and Catherine by snoring. The challenge was to find Oweguy's hiding place but Flare decided not to wake the others up despite Catherine asking and Chuck waking up his other teamates so Jake slept through the entire challenge. In the end Chuck found Oweguy first and the Screaming Hamburgers lost their first challenge.

Jake had an updated role again in Dancing with the Losers but would probably be his last. The challenge was a dance contest and five people from each team had to dance. Jake volentiered and Kuro accepted. The other people dancing were Jasmine, Emily, Yuki and Kuro himself. During the challenge most of them messed up due to the stage having poor floorboarding and Jake was one of them. While Jasmine and Emily tripped just a few seconds after starting to dance Jake tripped right when he started dancing resulting in him getting a score of zero. Jake was upset that Oweguy said he wasn't a good dancer and he told him he was good at Dance Dance Revolution. When the Killer Hot Dogs went up they all went at once and did a good performance that Oweguy liked mostly due to that they formed his head resulting in the Screaming Hamburgers losing again. At the elimination ceremony Jake and Emily were in the bottom two and Jake was eliminated. He was upset and Oweguy explained that he got the lowest score and with that Jake leaves on the loser boat. 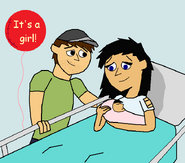 Nianah and Jake with a newborn Cindy.
Add a photo to this gallery
Retrieved from "https://totaldramaislandfanfiction.fandom.com/wiki/Jake_(Oweguy_series)?oldid=345755"
Community content is available under CC-BY-SA unless otherwise noted.