Start a Wiki
Julian is labeled as The Slacker Musician in Total Drama Tokyo. He was placed on the Total Drama Yum Yum Happy Go Time Candied Fish Tails.

Julian isn't exactly the most active person ever. He doesn't like running, basketball, or any other sport. His brother is a successful runner and he's been trying to make Julian participate in track and cross country for years, but Julian has refused. Julian, instead, likes to play the drums. He started playing the drums when he was four, stumbling upon his brother's drum set and banging on it. He started to play electric guitar and keyboards when he was eight. He then joined the school jazz band and he was extremely good at it. But then, he realized that all the people in the band were nerds, so he decided to start his own band. He named it "Alien Earache" and recruited his three best friends, as well as his brother, to be in it. His brother refused, though, because he was too busy with cross country and stuff. Julian then decided that he was cool enough, so he grew an afro. The afro and the band made him more popular at his school, and he's had some hot girlfriends. Julian isn't a fan of schoolwork, though, because he thinks it deprives him from working on the band, when he stays up all night and rarely sleeps, except in school. His grades are not pretty, and his parents signed him up for a reality show, thinking it was a math camp.

Julian realized his parents' mistakes, and was happy to compete in a reality show to get away from school. He misses the band, though.

Julian as Silent B from TD:ROTI, drawn by Manatee! 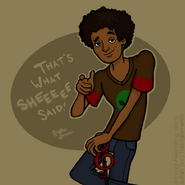 Fanart of Julian drawn by Freefalling Lilacs! Thank you so much!
Add a photo to this gallery
Retrieved from "https://totaldramaislandfanfiction.fandom.com/wiki/Julian?oldid=532053"
Community content is available under CC-BY-SA unless otherwise noted.