Start a Wiki
Kaleb, labeled as the Star in Training, is a contestant on Total Drama Frozen.

Kaleb was fourth child, of a family of six kids. His parents did their best to care and love for all six of the children, but it was a hard task to feed them all and still have free time. They worked long hours, and so they hired a nanny for the kids. Kaleb was only a child when the nanny first started to work, and he was a very needy one at that. He would often cry out for the tiniest of things; a fly was in soup, his cereal was too cold, or the ice wasn’t a perfect cube. Needless to say, Kaleb wasn’t the nanny’s favorite. As he grew older, Kaleb joined the theater club, a club which his nanny just-so-happened to run. Kaleb was one of the best in the club, but never once starred in any of the productions- he made his nanny’s job a living nightmare, the least she could do was return the favor. Kaleb signed up for Total Drama Frozen, knowing it would be a chance to be the biggest star.

Kaleb arrives in It's a Winter Wonderland with a bang, insulting Hannah's love of Britt, and getting into a fight with Ivy. He continues to make fun of Hannah to Rosalie who ignores him. Kaleb doesn't appreciate Andre's performance, so Dania throws a snowball at him. Kaleb scares Vishal off when he arrives. Kaleb teases Britt when Hannah still hasn't returned after their kiss.

Later in, It's Still a Winter Wonderland Kaleb is shown to be on Mrs. Claus team, to his teammates annoyance. He talks to a snow sculpture, not realizing it's made of snow. After the teams are reformed, Kaleb comments that Lindsay is going to get them all killed. At the first challenge, Kaleb steals Ivy's idea, and leads his team to the lead. When their sleds stop working, Kaleb throws a fit, worrying his career was over. Kaleb jumps onto the other teams sled with the rest of his team, and ends up in the runaway snowball. Kaleb is sure that his team won the challenge, and celebrates with them when they're revealed to win. Vishal tries to help Kaleb blend in with his team after the challenge.

Kaleb cleans up the remains of his teams blanket fort in The Frosted Towers. Kaleb is insulted when Hannah thinks that Kaleb can't protect them during the challenge. Kaleb gets grouped with Lexi and Twilight for the challenge, and is amazed when they find the pearl so easily. Kaleb hides behind Lexi when a mummy starts to chase them through the tower. When Lexi doesn't take the threat seriously, he yells at her and she breaks down crying. It's revealed that Lexi lost the pearl when she freaked out, but Kaleb is blamed for the loss and is eliminated.

Kaleb feeds Hannah icecream while she trains with Emmett in This Snow is Real. He listens to Hannah as she talks about how Britt cheated on her, and got her eliminated. Kaleb gets confused when the reward for the challenge is to return to the show, and declines participating. When the reward is switched to choosing who goes back, he agrees. Kaleb takes an early lead during the challenge, and defends Ivy after her embarrassing secret is reveled, saying that he's sure they all have secrets too. Kaleb forfeits the challenge, deciding he'd rather watch Dania have to choose who returns than do it himself.

During the second part of the Christmas Special, 'Tis the Season, Kaleb and the other eliminated contestants return to the Winter Wonderland. Kaleb attempts to make a big entrance, but no one cares.

In Ticket to Win, Kaleb gets jealous that a bigger star than him is showing up. Kaleb stalks his prey, Vishal around the Winter Wonderland. Taunting him about how he dislikes everyone around. Kaleb lies saying they watch their every move at the Playa Des Losers, and Vishal admits that everyone around is an idiot. Kaleb laughs admitting he lied, and that Vishal has to whatever he asks now, or he'll reveal his secret. Kaleb is excited to leave the camp with the other contestants at the end of the challenge.

Kaleb thinks that Ivy shouldn't be in the finale in New Year's Greeting, citing the fact that she's been eliminated twice already, despite this he chooses to support Ivy in the final challenge. Kaleb tries to help, by using his star power with the elves, but instead they throw Christmas ornaments at the teens. Kaleb taunts Britt as Ivy pulls ahead of him.

In New Year's Farewell, Kaleb complains that only Ivy could blow the challenge on the finale. He's seen adjusting all of Heather's lights to focus on him in the living room. Kaleb joins Twilight and Jade in supporting Britt as he races to the Ferris Wheel, and tosses him a bottle of water. When he sees Britt's finale video, he is shocked to see Jade's actions and calls her out for them. He comments that Rosalie's actions in her video were creepy. He seems shocked when Rosalie is crowned the winner.

During End of a Season, it is revealed that Kaleb has since gone on to start a successful Youtube channel. 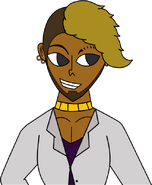 Kaleb in Autumn (Wiz Dan)
Add a photo to this gallery

Retrieved from "https://totaldramaislandfanfiction.fandom.com/wiki/Kaleb?oldid=531758"
Community content is available under CC-BY-SA unless otherwise noted.