Nic loves to watch TV. His favorite show is Total Drama, especially World Tour. When that came on, he began to obsess over Alejandro, who is now his idol. He saw how at his school, girls swooned over Alejandro, and he wanted to get in on that kind of action. So he began imitating Alejandro in appearance, behavior and pure evil-ness. He grew a soul patch and long hair to look like Al and changed his last name to Burromuerto, but that didn't work, so now he's back to his old appearance due to soul patches being "hard to maintain." But he still rips off his shirt at random times, pretends to vote off people in his bathroom mirror, and practices saying "One by one, they'll all go down." When he tries to act evil, boys think of him as pathetic, and girls think he's "cute." As in, "Aww, look at that bunny, it's so cute." Well, he doesn't want to be called cute, he wants to be PURE EVIL! And he'll do anything to make sure that happens, even voting off his allies just like his hero, Alejandro.

Nic was one of the last contestants to arrive at the island in the premiere. He appeared wearing sunglasses, and immediately yelled at someone on the boat to start playing salsa music. Immediately, Nic walked up to Chrissy and started flirting with her, showing her his "buff ab belly" which consisted of skin and bones, and was one-upped by Trey, who he became jealous of. He then bragged some more about his abilities, such as tying his hair into a ponytail with only his legs, and tried to do it in front of the others but failed. Once Elena arrived, Nic tried to flirt with her as well, and became enraged when she called him "cute" instead of "hot." In the second challenge, he briefly ran into Chrissy in the forest and tried to flirt with her some more, but was once again rejected, he then tripped over a tree stump and landed in the mud. He was picked by Elena to join the "Terrible Tikis" team.

Nic had a conversation with Carson the next morning about girls, where he lamented that girls such as Elena didn't appreciate his true beauty and evilness and just thought he was cute. Carson told Nic that he couldn't change that unless he drastically changed his appearance, which Nic wasn't happy about. During the rafting challenge, he flirted with Elena some more, but she continued to call him cute which made him more and more enraged. When their raft popped, Nic initially freaked out and then tried to rephrase all of his statements as Alejandro-like lines, which annoyed Elena. At the campfire ceremony, he was almost voted off, but once he was saved he bragged about how "evil never gets eliminated."

The next morning, Nic complained to Chris that he didn't give them breakfast, and Chris handed him a bag of Total Drama Yum Yum Happy Go Time Candy Fish Tails, which he ate and then barfed. In the confessional, he admitted that it was the best thing he had ever tasted, but since Alejandro barfed when eating them, he had to do the same. During the challenge, he tried to help his team by diving into quicksand to retrieve dinosaur bones, but unsurprisingly got stuck in the mud. Once again, he was almost voted out, but saved again. After his team lost the following challenge again, he was finally voted out by his tribe members, but saved thanks to Sharissa quitting, much to the others' dismay.

Nic was yelled at by an enraged Julia the following morning, who told him that he was not evil or attractive and called him a dumbwad. He attempted to step up and sing for his team in the challenge, saying that Alejandro was a great singer, but was quickly rejected by Julia. In the confessional, he plotted about getting rid of Elena due to realizing that she was a "ruthless monstress bent on destroying the world," and after his team lost the challenge again, he continued to plot by talking to his stomach, who he named "Abby." After Elena was indeed voted out, Nic commented in the confessional that she was expendable, and said that one by one, the rest of his team would go down. His dramatic speech was interrupted when he fell into the toilet and yelled "Crap!".

Nic was overjoyed that he was able to take out Elena, but was shut down by the rest of his team, as usual. In the challenge, he was pitted against Trey in a puzzle-solving competition. Despite Trey having a 1,000 piece puzzle compared to Nic's 100, Trey was still able to win, and then took off his shirt after he won to make Nic jealous. His team unsurprisingly lost the challenge, and he voted for Carson to go home, which he did.

When his team dwindled down to him, Julia, and Devin, he was forced to actually do work, jumping into the water to find hidden treasure while wearing nothing but a Speedo. He dug up what he thought was a "treasure," which turned out to actually be an octopus that squirted him in the face with ink. His team finally won the challenge, and he enjoyed the winner's cabin. The following morning, he woke everyone up by singing "Friday" by Rebecca Black, which annoyed his teammates, but he continued to sing it anyway. In the challenge, he barely did anything to help his team, but after fleeing the campsite due to dire wolves, the Terrible Tikis won again, to his happiness.

The teams were then merged, and Nic and Devin moved in with Arthur, Gary, and Trey. He easily hit it off with Arthur and Gary, while annoying Trey to death. In the bridal challenge, Nic was paired with Chrissy to his excitement, and annoyed her the whole time with his clingy and desperate nature. In the llama challenge, Nic picked a small, timid-looking llama who he named "Abby Jr." He lost the challenge due to Abby Jr. being afraid of everything, but finally was able to vote Trey out with Gary and Arthur. In the following chapter, the three male contestants left - Nic, Arthur, and Gary - played Truth or Dare, with Nic being forced to steal Chrissy's bra from the girls' cabin. He managed to snatch it, but not before being chased by an incensed Chrissy. He put in very little effort in the challenge, as usual, and then refused to vote out Chrissy after the other two boys appealed the possibility, getting his wish as Helga was voted out.

Nic and Arthur had an argument after Helga's elimination, where Nic accused Arthur of being slobby and disgusting. He pointed out a piece of toilet paper with a raisin, a long black hair, and a suspicious yellow liquid on it, saying he had found at least ten of them, and Arthur said that was Vance, his "BTPF" or "Best Toilet Paper Friend." The two began to brawl, and were eventually stopped by Gary. During the challenge, he got into another dispute with Julia, who pointed out that Alejandro got second place after Nic bragged about how he would win. Nic retorted by saying that Alejandro won in Romania, Poland, Denmark, and Hungary. He managed to win the challenge and was sad to see Gary leave.

The following morning, Nic attempted to flirt with Chrissy again and decided to ask her out. He tried to impress her by putting on a "cool face," but she laughed at him, so a disgruntled Nic said in the confessional that he had to "up his Al standards." In the challenge, he was paired with a snake, who he named "Abby Jr Jr." The snake didn't listen to him through the whole challenge, and eventually disappeared, being found in his underwear. He attempted to teach Abby Jr Jr. tricks to impress the judges, but the snake refused, causing him to lose the challenge. He was finally unanimously voted out, and after annoying Chrissy some more, she decided to kiss him for a split second to get him to stop annoying her.

In the finale, he, Devin, and Gary formed an Arthur fan club, being the only contestants to support Arthur. During the challenge, he called Julia a "ginger," and she interrupted the challenge to beat him up and knock out one of his teeth. When Arthur lost, Nic comforted him.

After coming back from Tiki Jungle, Nic developed an even more inflated ego from appearing on TV, despite still being a pariah at school. While going through puberty, Nic realized that he needed to get into shape and become muscular, so he started going to the gym every day to develop the ideal Alejandro-esque body. After about a year of working out, Nic is now in much better shape and has also hit a growth spurt, but his personality is still the exact same, which doesn't make him any more popular with the women he tries to seduce. He traveled 10 hours to Canada to attend a meet-and-greet hosted by Alejandro, but was forcibly removed by security guards within five minutes.

Nic received an offer to return for TDSS and couldn't pass it up. He looks forward to being reunited with his "old flame" Chrissy, and plans to show the new contestants how truly evil he is.

"I am Nic," says Nic, in front of a camera. "But truly, I am actually Alejandro Burromuerto in a different, less threatening body. I'm going to..." He rips off his shirt, revealing his skinny chest. "Woo some women! With my buff ab belly, of course. I will also..." He puts his sweatshirt back on. "Vote out the women after wooing them! One by one, they'll all go down. Believe me, I am the most evil being this show has ever seen. Even Alejandro does not compare to me. I have taken all of his traits and perfected them! Just pick me, and I promise a healthy serving of evil." 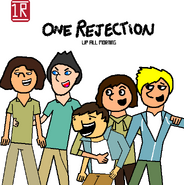 Nic as Zayn Malik in One Rejection's album art. 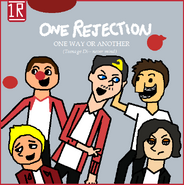 Nic as Zayn in yet another One Rejection album cover.
Add a photo to this gallery
Retrieved from "https://totaldramaislandfanfiction.fandom.com/wiki/Nic?oldid=532050"
Community content is available under CC-BY-SA unless otherwise noted.