Radley is Murdoch's older brother. He has done sports for a long time with his favorites being baseball, football, basketball, and hockey. He also does swimming, weightlifting, jogging, track meets, and more. Due to all this excercising as well as eating healthy he is very tall and has strong muscles. Some people are afraid to mess with him due to them thinking he's very strong and mean and even Murdoch is afraid of him a little. Radley then wanted to put his muscles to the test and that's when he saw an ad for Total Drama. Knowing Murdoch competed once he decided to join to see what it's like.

Radley joined Total Drama to show the other contestants how strong he is.

Fan art of Radley by Sprinklemist. Thanks dude! 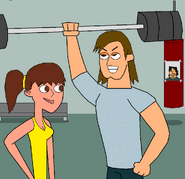 Radley hanging out with TDAthletic's Zoe.
Add a photo to this gallery
Retrieved from "https://totaldramaislandfanfiction.fandom.com/wiki/Radley?oldid=359701"
Community content is available under CC-BY-SA unless otherwise noted.