Start a Wiki
Trick is labeled as The Skater Dude in Total Drama Revolution. He was on the Epic Platypi team. He returned for Total Drama: Superstar Showdown, and was placed on the Swagged Out Citrus Fruits.

Patrick was once a very nice young boy who always abided by the rules. He disliked anything that could hurt him in any way. Although, this all changed when he got his first skateboard for his seventh birthday. At first, he was horrible. He broke his arm twice in a year, thanks to his skateboard. Eventually, he got much better at skate tricks, thanks to his friends, and the fact that he practiced twice a day every day, once before school and once after school. Patrick then decided that he was sick of people associating his name with a silly character on a children's TV show, so he decided to start going by Trick, in correspondence with his love of skateboarding tricks. Many people thought that was pretty funny and cool, so it was a change for the better. Trick is fairly popular at his school, because many people think it's very cool for someone to do a 360 degree flip on a skateboard. Trick is also apparently handsome, and has had a number of girlfriends, all of which had wanted to be like him, but whenever they tried to get on a skateboard, they ended up in the emergency room in the hospital.

Trick joined Total Drama for a wild experience, and to meet girls. He brought his skateboard, Irving, along as well.

After Total Drama Revolution, Trick decided to go back home and focus a little more on skating. He got a haircut so he wouldn't be viewed as a "pretty-boy" that much anymore, and he decided to stay with Cammy. Trick has been going to Cammy's house, and hanging out with her. He also got an account on the Total Drama School Fan Story Wiki (Sk8r1996) and has been chilling on there too. Trick has made amends with Antoine, and the two sometimes hang out together. He has also placed a restraining order on Toad. All in all, Trick is mostly the same, and he is enthusiastic to compete again.

Trick was picked to return for the fifth season because he was an underrated character and the producers felt like he needed more spotlight. He happily accepted.

Trick is outside in a skating park, listening to his uPod. He turns it off and winks. He then does a skating flip on one of the structures. 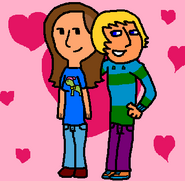 Kavren, Trick, and Toad staring at Chelsey's breasts.
Add a photo to this gallery
Retrieved from "https://totaldramaislandfanfiction.fandom.com/wiki/Trick?oldid=509264"
Community content is available under CC-BY-SA unless otherwise noted.