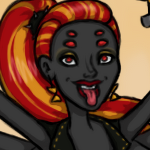 Um ... I might be coming back soon to anybody who sees this. Happy holidays in the meantime.

Hello, I'm Freefalling Lilacs (feel free to shorten my name however you want, FL or Lilac is probably most common). My real name is Kristen if you prefer to use that. I'm rather shy and eternally nervous so I tend to stay out of the chat, but I'm always willing to talk one-on-one if anybody wants to. My only project here is Total Drama Island: For Your Entertainment, a competition story. It's long and overly detailed and still incomplete but, to be honest, I'm really proud of it.

I try to always respond to comments, whether they're on my talk page, blog, or story talk pages, even if it's only to give you a thank you. Though I'm not always prompt with answering, you can usually expect some form of response.

My info box up there almost always has false or vague information in it (other than my birthday, which I don't change). My icon is Wydowna Spider from Monster High because I am secretly a preteen girl on the inside. My signature currently references the song "Angels & Airwaves" by Angel Haze, which is great to have on shuffle on your music player if you're combating depression. Trust me, I know from experience.

I've had three things featured on the site: Elena for Featured Character, and the title card from Episode Seven and the group promo of TDI: FYE for Featured Image.

If anybody wants to know, I've compiled a ranking of my favorite Total Drama characters over here.

If you like art and want to see some more of mine, why don't you stop on over to my DeviantART account: Vestigia.deviantart.com. Also, if you happen to have a tumblr, I'm a lot more active at vestigial-wings.tumblr.com. That's also mostly art, though there is little to no Total Drama on it right now. I'm interested in Total Drama in phases, unfortunately, and right now I'm in an "all cute monsters all the time" phase.

Other than Total Drama, my interests include shows and media about monsters, female-fronted rock bands, shoes, the brain, well thought out character designs, skeletons, and cartoons.

Total Drama Island: For Your Entertainment

The only story on this site that I'm working on. This is a competition story (if not already obvious by the name) featuring twenty-two new campers on a new film set. One thing I can warn about this story, though: it's loooooong. I like each "episode" to have two chapters so I don't have to rush any challenges, drama, or relationships. The story is planned to be 20 episodes long unless I make a last minute change, so that's going to be about 40 chapters.

The story will be updating on Thursdays, so keep an eye out!

I draw all of my characters myself in Photoshop Elements. I choose not to draw in the Total Drama style because I think it severely limits certain aspects of character design ... and also because I'm not very good at it. Each character has a completely new look that I've recently updated. If you click on each character, you can go to their page and see their alternate outfits. Check out my Minor Characters page if you want to see more.

Zack Hill: The Technophile
Add a photo to this gallery

Add a photo to this gallery
Retrieved from "https://totaldramaislandfanfiction.fandom.com/wiki/User:Freefalling_Lilacs?oldid=484508"
Community content is available under CC-BY-SA unless otherwise noted.