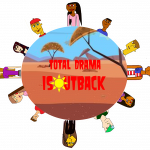 Total Drama Clash of the Action: Written from December 2017-February 2018, it was my first public fanfiction and it isn't very good, but unfortunately i probably won't ever rewrite it and if you want to understand the rest of my story, read there. It's set in the Amazon after 18 teenagers were taken there, thinking they were going to acting school. If you liked Commando Zoey, Ezekiel, Jasmine or Cameron, you'll be pleasantly surprised. (They aren't in this, but characters like them are)

Total Drama: The Clash Returns: The sequel to this written fro March-April 2018, not much better than the first one, but it also has a lot of stories mentioned in the later seasons, so read it if you want. This one only has 14 of the 18 people and is set in the same film-lot as Total Drama Action. If you like Jasmine again, Scott or Geoff, you'll also be pleasantly surprised. (They also aren't in this, but characters like them are)

Total Drama: Life of Iqaluit: My third season written from May-December 2018. Like the name suggests, this season takes place in the north-east town of Iqaluit, and it's also set in one of their 2 high schools which was struck by an earthquake. This one has extra staff members, and is slightly better than the first two. If you liked Cameron, Courtney, Justin or Tyler, this season's for you. (Again they aren't in the season actually, although Justin has a cameo)

Total Drama is Outback: This one was never finished. I started writing this at the beginning of 2019 before my story deleted, and ever since i've only written 2 episodes, both recently. I'm trying to rewrite it now. This one takes place in Australia with 12 new contestants and 2 new staff members(one of them needs a staff). Also pretty good writing. If you liked Gwen, Noah, Duncan, Leshawna or D.J., you'll like this season.

Total Drama: Stars of the Seasons: As you can probably guess, this is an all-star season, 19(or 20) contestants from the last 4 seasons go around the world. This one started in March 2019, and i never finished it. I've gotten to the top 7, which is better than the last season. Probably my best season in my opinion. If you like any of the previously mentioned contestants, then read this one, with a box of tissues.

Total Drama: Antagonists in Antigua: This one hasn't even started. Yes i know, i have 6 seasons on this wall and i've only done 3 of them, but whatever. 8 antagonists from the previous seasons meet 8 unsuspecting newbies, in a battle for the million. Also, even more staff members, a new host AND on a sunny island? This will start probably at the end of the year when i finish the fifth season.

Total Drama Villains: Also hasn't started, but unlike Total Drama: Antagonists in Antigua, this will start soon. 16 villains from the original total drama franchise are here on a shady island in Ontario. Not Camp Wawanakwa, that island's sunk.

Total Drama Action Returns: My first fanfiction, which was my prediction of what would happen in the new Total Drama season before we found out it was daycare, and the devastating news unmotivated me. None of it is on the wiki though, i just have a page of the data.

Retrieved from "https://totaldramaislandfanfiction.fandom.com/wiki/User:Jsh27845?oldid=531865"
Community content is available under CC-BY-SA unless otherwise noted.