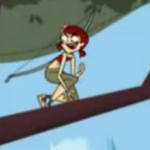 Hi guys! I'm Omg.Chacha, but you can call me Chacha! It's easier to say, and then you don't have to feel like Sierra when you type my name. That was sarcasm. I guess sarcasm doesn't really work online. Anyways, feel free to browse around. I did make some original characters, and you can see their names and descriptions on the Total Drama Re-Docked page.  By the way, yes I'm still active, I'm just very lurky.

If you're my friend add yourself. Then again I don't know how that works, so yeah.

1.Cha-cha-cha-cha- <a href="http://totaldramaisland.wikia.com/wiki/User:Omg.Chacha">Omg.Chacha</a> is my name, bein' sarcastic is my game. (Unknown - unknown)

2. Omg.Chacha is mah name, being sarcastic is mah game!(unknown - unknown)

Retrieved from "https://totaldramaislandfanfiction.fandom.com/wiki/User:Omg.Chacha?oldid=472382"
Community content is available under CC-BY-SA unless otherwise noted.