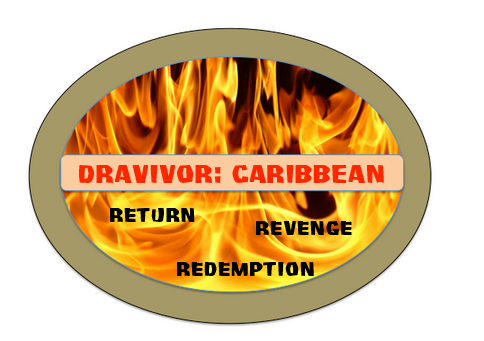 roflmao look at dra's logo it's so awful xdddd

Dravivor: Caribbean - The Resurrection is a game about second chances. It is scheduled for March 15th, which is a Saturday. Plus, most people RP on Saturday over Friday anyways.

I am requesting 18 people to return to the competition. However, it isn't expected for all 18 to show up. This list is a finalized version of people who deserve a second chance at the competition.

Two people will also be returning for a third time; they are known as 'coaches'. The qualities of this coach mean that they were in All Stars but were robbed of a better position. The 'coaches' will be playing just like everyone else. (it's just an excuse to bring back Cassie de Blanca and Eleanor oops)

This is a request list. You do not need to state whether or not you accept or whatever in the comments, but if you are looking to play you must show up on chat the day of the RP. If you are not on the requested cast list, you can ask me on chat at any point about returning. If it's approved you will be put on a side list and will be requested to join if more spots are needed.

Because this season will have Redemption Island. (Did you expect it not to since it's a game about second chances??)

So, if your character fails in the game and on Redemption Island, you suck ^-^

Who will be able to avenge their previous placements? Who will defeat their former enemies as they attempt another run at the title of Sole Dravivor?

Retrieved from "https://totaldramaislandfanfiction.fandom.com/wiki/User_blog:1dra7/Dravivor:_Caribbean_-_The_Resurrection?oldid=450799"
Community content is available under CC-BY-SA unless otherwise noted.