Welcome to the Coco Mansion. Coco Anderson has just been murdered, and it's your job to find out when, what with, who, why, and where? The police need to know. You've been provided with a map left behind by Coco, which seemed to be marked on by the killer him/herself. Anything the killer added is written in red. You've also been provided with a biographical file for every single suspect in the case. 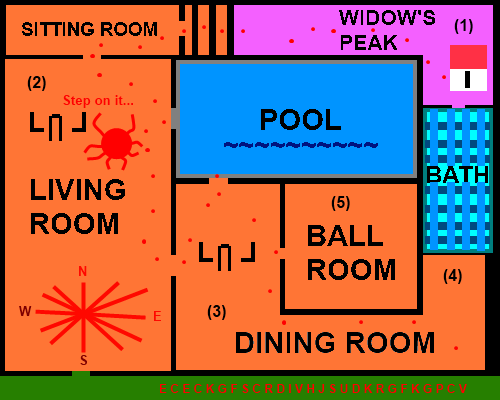 (1) - A Knife was found at this location

(4) - A Butterknife was found at this location

(5) - A Broken Glass Shard was found at this location

Roman Calzo - Roman Calzo was a very rich man who was once threatened by Coco. As so she did, she sued Roman for 'sexual harassment.' However, it was all a scam to get Roman's income by a half. Roman went bankrupt in months, and went to prison for failure of payment. He vowed his revenge on Coco. Could be be responsible for this crime?

Wes Salvado - Wes was a great gymnastics performer. He was great at flips, flops, handsprings, cartwheels, etc. He was in the middle of a show when he got a call back to the back area of the gym. Coco had seen his skills and asked him to do an interview with her to go on her website where she interviewed interesting people. Days went by, and the interview was successful. She posted it on her website, and Wes looked it up. The interview comments were terrible. 'He avoided my questions.' 'He wasn't good at all that day.' 'What a sucker.' Wes was infuriated. Would he kill Coco for giving him a bad reputation?

Claire Barlo - Claire was a great country club singer. She was going to bed one night when she received a call from Coco, asking for an over-the-phone interview. After agreeing, Claire proceeded with the interview. A day later, Claire looked up the results on Coco's website. Claire was a huge hit for Coco! She got so many calls for stage performances that it was overwhelming. Claire was becoming richer by the second all thanks to Coco. Coco, however, wanted in on the fame. Claire rejected Coco over the phone, saying she didn't want Coco trying to stop Claire--That she'd seen Wes's interview. Coco then ruined her reputation with another interview, twisting Claire's words. Did Claire kill Coco for giving her a bad name?

Sammy Jayta - Sammy was a great actor in show business and plays. Coco had requested an interview with him--a local celebrity. He went along with her, and did the interview. Days later, he saw she had given him an amazing name in her interview. Coco called back later, saying he was extremely attractive, and that as long as Sammy would 'do things' for her, she would continue giving him his amazing name. Reluctantly agreeing, Sammy continued to 'do things' with Coco. After a year, Coco stopped, and without Sammy knowing. When he found out, he got enraged. Did he kill Coco for this?

What Do You Think?

Also, if you want to be the top answerer, you need to tell me how you got your answers. What happened? Did you guess, did you use the clues? Be warned, there's a possible red herring on the map.

The perfect answer to the case will have the decoded word and a good explanation other than "I guessed." The person with the top answer will receive a prize! ^_^

Retrieved from "https://totaldramaislandfanfiction.fandom.com/wiki/User_blog:1dra7/Murder_in_the_Dark_Puzzle?oldid=370421"
Community content is available under CC-BY-SA unless otherwise noted.