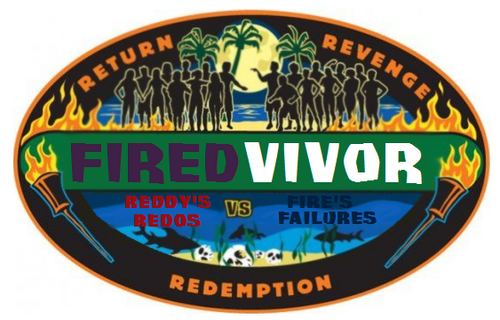 Redvivor returns for its fourth season; and this time, six former castaways will be returning for a second chance at the title of Sole Redvivor. They will be facing off against six second-chance players from the FireVivor series, in a truly epic battle for the ages. And with a twist looming over the returning players... Is anyone really safe?

1 Noah won the final duel and re-entered the game.

2 Myra was given immunity by Noah.

2 Yejide voted for Vince while he had immunity, and thus one vote against Vince did not count.

3 1 vote against Noah was nulled thanks to a hidden immunity idol.

Retrieved from "https://totaldramaislandfanfiction.fandom.com/wiki/User_blog:Reddude/Firedvivor:_Reddy_vs_Fire?oldid=521527"
Community content is available under CC-BY-SA unless otherwise noted.