It's that time of the year again, folks! For more than four years now, this wiki's users have tested their skills at outwitting, outplaying, and outlasting in one of the wiki's cornerstone RP series: Redvivor. After 23 seasons and 23 Sole Redvivors (played by 18 unique users!) Redvivor is on a new mission to determine the best of the best of those strewn throughout Redvivor lore. Nearly three and a half years ago, 15 iconic castaways from the series' first six seasons went head to head in the inaugural all-stars season. Then, two years ago, 15 iconic failures from across Redvivor history returned for a second chance. Now, a new chapter opens up in the saga of Redvivor returnee seasons, and this time? We're going all out. This season, Redvivor's most legendary castaways will go head-to-head, and while they may think they've got it all figured out, there's only one way for them to snag the title in what is sure to be the most legendary Redvivor season ever. They'll have to--

-Shot of Satan terrorizing Luna into her #RedvivorBreakdown-

-Shot of Gia and Stewart gasping at a tied jury vote, wondering who will break the tie-

-Shot of Angel playing the Sacred Idol, the jury's reactions, and Midge's sorrow-

-Shot of So Kim leading a massive mutiny against the rival tribe, leaving only two behind-

-Shot of Jaxdrown winning the intense final immunity challenge, Midge and Gloria exhausted beside him-

-Shot of Chanel assembling the Chanels, with Ciera and Pengai both present-

-Shot of Woo pulling out the Super Idol at Tribal Council, to everyone's shock and rage-

-Shot of Tobias and Tynnyfer strategizing on the beach, NotRhonda lurking in the background-

-Shot of HornyWidow beating Sharon at firemaking, causing the jury and Randy Jackson to flip out- 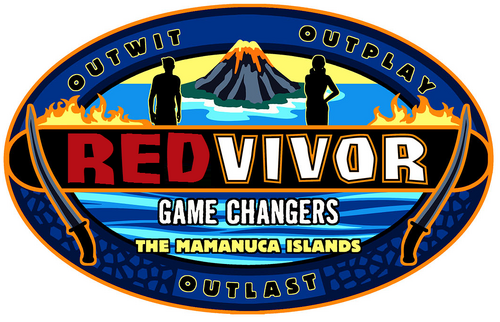 Alright! Now that I've built hype, it's time to reveal the cast! The following list is by no means final, just to be clear; this is just one I've thrown together myself, I have NOT consulted with everyone on this list so it is very tentative. I also don't expect to get 19 people for a single RP. If you aren't on this list, but want to play, let me know! If you are on this list, but want to play a different character, let me know! I am being very flexible with this cast. I understand that some people don't want to be forced into certain roles or may feel too much pressure returning as a legend; just communicate with me and we'll get something worked out! But anyway, here's the list:

Again, be sure to let me know if you want a different character! The sooner you let me know in this process, the easier it will be for me.

The most fun part of trying to host a returnee RP! Okay, so, my schedule for July pretty much open right now. I would prefer to host on either Friday or Saturday, but Thursday and Sunday are not entirely out of the question either if those work better with people's schedules. So, going through the calendar, these are the Fridays/Saturdays in July 2017:

So, let me know all of the dates on this list where you're available, and any preferable days not on this list as well! I'll try to keep in touch with everyone as the process goes on, but for now, this is where we'll start. Are YOU up to the Redvivor Game Changers challenge?

NOTE: Please comment your availability on this blog so I can keep track!

Retrieved from "https://totaldramaislandfanfiction.fandom.com/wiki/User_blog:Reddude/Redvivor_Game_Changers_Announcement?oldid=520428"
Community content is available under CC-BY-SA unless otherwise noted.